The music of the impressionist composer meets a jazz orchestra.

Once again this year, the CMDL invites students from different European music schools to work together on a Big Band project imagined by the guest artist. Pierre Drevet, a brillant French trumpet player and composer, will have the pleasure of leading the European Big Band in March 2019. Afer a week of residency at the CMDL, they will perform Big Valses…! at le Bal Blomet on March 20th. 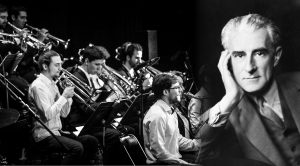 « I have always admired Maurice Ravel’s genius of composition and orchestration. It gives the impression of «coloring harmony». With its very clear melodies and simple harmonies it’s a bit like the «good» jazz standards. It was a dream to create a «cross-mix» between this impressionist music and jazz music through a Big-Band.» Pierre Drevet

Among the figures of French jazz, Pierre Drevet is one of those who matter. Musician, trumpet player with solid phrasing and always precise with a fascinating clarity, he is also a composer and brilliant arranger. Member of the Brussels Jazz Orchestra, he is now devoted to several Big Band projects.